VoffCon is a system for controlling devices and appliances from anywere. It is made up by two components. A node server and A device server. The main benefits of this system is your ability to create your own Controls and Cards, which other users logged in to your system can use to control devices you deside to put on your Cards. 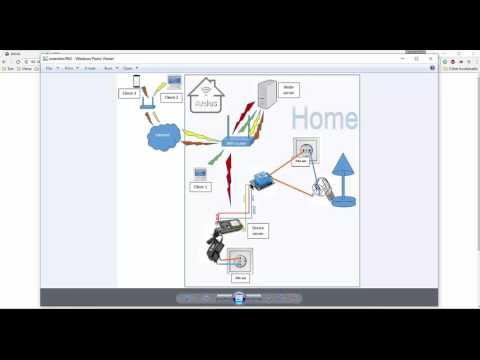 Is a server created with node.js. This server creates webpages which can be viewed in a web browser like Google Chrome, Microsoft Edge and Internet Explorer. If you portforward the server out to the internet you will be able to accsess your devices from anywhere. It uses the Passport authentication middleware to keep your devices from being controlled by everyone. The server provides connections to many devices and uses passport to make sure that the user is authenticated before he is able to give commands to the server running on the devices.

The basics for the node server

This application is a server intended to run on a computer where it can access the esp8266 and esp32 devices which run running a special server program which was developed for this server in mind.

You will need to install the following if you haven’t already.

Getting up and running

If MongoDb is not installed you will need to install it. See this instructions how to do that here.

Use windows file explorer to:

Or just use the windows command shell, by typing the following commands.

Please see this video tutorial on how install VoffCon on Raspbian

how to run mongodb on run on linux

Installing VoffCon on Ubuntu 16.04 (Linux) when all prerequisites are missing

Assuming that you do not have Mongodb, nodejs or npm installed. This would be the process you would follow.

And the go to a modern web browser and visit the url http://localhost:6100 to see VoffCon running.

Setting up the device server

Click here to get instructions on how to setup the device server.

More about the system

There are three kinds of users (actors). “administrator”, “power user/card creator” and a “normal user”.

Has the power to change/modify or delete all Cards, and devices. He can also give a user access to a Card, or a device, just like a card creator. This user is the only one who can upgrade, downgrade or delete users. He can f.example change a normal user to “administrator” or a “power user”. He can also change a power user back to a normal user. He has total control of everything.

He knows how to use a browser and he also has recived information from the power user on how the Cards work. He knows what the Cards and Do’s and Dont’s about a device he is able to control using the Cards. All knowledge about the Cards should be supplied by the power user.

A Card is a web-page which the normal user works with. On this Card there are buttons and/or controls which allow the user to change or view the state of the different devices. One Card can include controls for many devices. This Card is created by a power user. The creator of the Card will also be the one who will give other users access to a Card. By default only the user which created the Card will have access to the Card he created. The user card creator can select any user and grant him an access to his Card. The card creator is the only one who can modify it(with the exeption of the administrator). He can grant other power user access to his Card giving them card-creator privileges. No other power user can access his Card without the card-creator’s permission.

A Control is a control class which can be used when creating a Card. These Controls can be thought of as a library. For example, the DiodeCtrl is one of the basic controls. DiodeCtrl is a class which shows an image of a diode. A card creator can use this Control to display a pins values as a diode. SliderCtrl is another basic Control for the the card creator. It provides the user with a easy control of a pins value by allowing him to drag a button on a slider around, to change a pins value. The same user access rules apply to a Control as where described in the Card section above.

If a user wants to access a device then the system will grant him access if the user is a power user. The system will only give a normal user access to a device through a Card that controls the device.

Later additions to the system / nice to have

If you are not running VoffCon on Rasbian (32-bit system)

You can contact the author by sending email to gudjonholm@gmail.com or by regular post to the address Haseyla 27, 260 Reykjanesbar, Iceland..